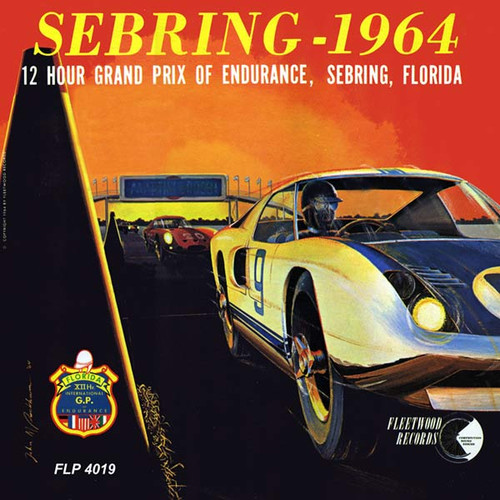 In this stateside rendition of the also famed LeMans in France, Sebring was dominated in this particular year by the teams and cars belonging to Italy's Ferrari and the United States team under Shelby American Corp with the new Cobras.

Ferrari finished one, two and three with the Cobras finishing four, five and six. The Ferrari winning team of Mike Parkes of England and Umberto Magioli of Italy drove their car to a then new record distance of 1,112.8 miles.

The sounds of Sebring are edited from some 12 hours of non-stop recording, recordings that include the explosive, firery accident between a Cobra and Alpha Romeo coming together in the pits. You'll hear a fire engine on it's way to the scene.

Many of the recordings in this visit back to the sixties, could be mostly sounds of the cars with some or little narration. The Sounds of Auto Racing Demonstrator served as a benchmark product designed for radio stations that featured advertising for weekend races, dirt track, jalopies,modified roadsters, drag racing, etc. The album was designed to put the right sound to the exact event. Nothing more, nothing less. Know what?? It was an instant success!