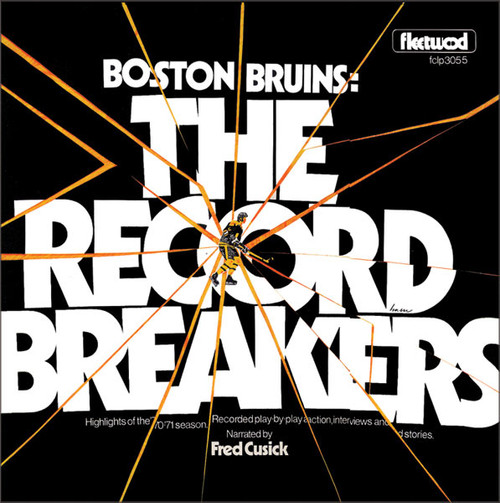 Thirty-Seven NHL records fall as the most prolific offense in NHL history, the 1970-71 Boston Bruins, mesmerizes the hockey world on a nightly basis, seemingly scoring at will as they attempt to defend their Stanley Cup championship.

Highlights of the 70-71 season. Recorded play-by-play action, interviews, and stories.

No team in the annals of the National Hockey League ever shattered so many records as the 1970-71 edition of the swashbuckling Boston Bruins. The Bruins cracked 37 of 'em. Here all the great moments are recaptured - Esposito's assault on Bobby Hull's record of 58 goals, they said it never would be topped - the century-makers (100 point): Esposito, multitalented Bobby Orr, hard-driving Johnny Bucyk and hulking right winger Ken Hodge, No team in history ever had four 100-plus point-getters. But there is more, much more.

The Bruins were, indeed, the sourge of the NFL and they packed buildings to the rafters everywhere they went. Record crowds showed up in Los Angeles, Oakland, Vancouver, Detroit, new York, and Yes, Montreal.

Here on this pulsating recording is captured all the thrills, spills, and chills of that remarkable season in the dramatic play-by-play accounts of Fred Cusick, one of the game's greatest announcers.

Cusick, indeed, left his broadcasting booth in Los Angeles and left a startled Ed Fitkin with an open microphone to record Esposito's comments live from the Boston bench after he scored his record breaking goal! To be sure, Esposito was just a part of this saga. There were the others: Bobby Orr, darting up the ice and stick-winging past dazed opponents; Johnny "Pie" Mckenzie, hurting down the right wing; amazing night the Bruins scored three goals in 20 seconds - that's right, 20 seconds - still another NHL record.

They are all here - the record breakers - mustachioed Derek "Turk" Sanderson, STeady Eddie Westfall, Gerry "Cheesy" Cheever, all of hockey's Gashouse Gang. These are moments to remember, and to savor for years to come.