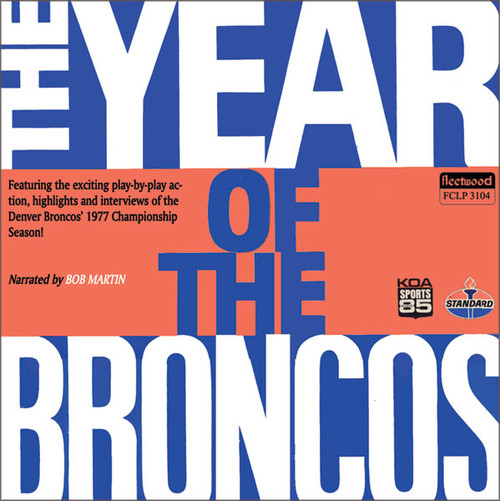 After two decades of being pro football_ã_s doormats the Denver Broncos of the _ãOrange Crush_ã fame capture their first championship and earn a chance to play in the Super Bowl. Featuring the exciting play-by-play action, highlights, and interviews of the Denver Broncos' 1977 Championship Season!

In 1977, it all came together. The Broncos were the sensation of the NFL, winning twelve of fourteen games. In the playoffs they kept right on going. They won the AFC Championship by knocking off the teams that had won the last three Super Bowls... Pittsburgh and Oakland.

The Broncos won the team play. And they made Bronco-mania a national phenomenon. The country turned orange.

The Broncos were a team of contrasts... There was a head coach "Red" Miller. For seventeen pro seasons, he had been a successful assistant coach. Then in his first chance as head coach, playing "one game at a time", he took his charges to the Super Bowl. ... There was a quarterback Craig Morion. His addition to the Broncos' roster provided the on-the-field offensive leadership that had been missing. ... There were the remaining members of the offensive unit... a group of multi-talented and dedicated athletes who had the big play ready when it was needed. ... Finally, there was the Orange Crus Defense. Already respected as one of the best in the NFL, they continued to wreak havoc on opposing offenses in 1977.

Yes, the 1977 Denver Broncos were a special kind of team. They gave all they had and, as a result, took themselves and their fans to the Super Bowl.

Dallas Cowboys: Back In The Saddle Again!

The History Of The Super Bowl