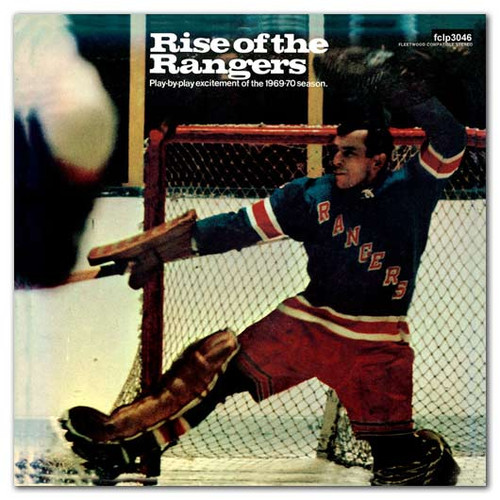 
Three and a half euphoric months n first place, capped by one of the most fantastic finishes in sports history, told the dramatic story of the 1969-70 New York Rangers. The wild excitement of that final, improbable week-end _ã_ when goals were a dime a dozen _ã_ was a fitting climax to the season that may well be a springboard to the Rangers_ã_ first Stanley Cup in over 30 years. Long known for their extraordinary zeal and their vocal powers, Ranger fans are a special breed. They dig hockey_ã_s special excitement _ã_ the searing speed _ã_ the frenzied offence _ã_ the bullet-like shots _ã_ the courage of the goalies _ã_ the panorama of color _ã_ the haunting _ãclick, click, click_ã of skates on ice. But thee is more, much more to the Ranger story For the past several seasons _ã_ the era of Emile Francis _ã_ the Rangers have been staging a dramatic climb in National Hockey League circles. It ha been _ãthe rise of the Rangers_ã, and the Broadway Blues are the only NHL team to qualify for the Stanley Cup Playoffs the past four years in a row. Some will tell you that the peppery Francis, as general manager, coach, and chief architect of the Rangers_ã_ revival, is on the verge of building a hockey dynasty in New York.

Injuries eventually knocked the 1969-70 Rangers out of first place and the playoffs after a brutal six-game Stanley Cup series with the Boston Bruins. The 1969-70 season was indeed a special one. Who could forget the cries of _ãWe_ã_re number one_ã as the Rangers rolled over jut about everyone during November, December, and January? Or the sheer ecstasy of that final regular-season afternoon against Detroit? Nine Ranger goals hit the net that day. It was fantastic. Then came the agonizing wait while Chicago played Montreal at night. The Hawks romped, 10-2, and the Rangers made the playoffs by scoring two more goals than the Canadiens during the regular season. That never happened before in the NHL history. Not in over half a century. All the sounds and drama of Ranger hockey over the past few seasons are captured here. You_ã_ll hear the Rangers themselves talk of their success _ã_ Relive other past thrills _ã_ Boom Boom Geoffrion_ã_s first Ranger goal in Madison Square Garden _ã_ playoff excitement against Montreal and Chicago. It_ã_s all here for you to relive and to enjoy over again _ã_ it_ã_s the rise of the Rangers.

The Chemistry Was Just Right