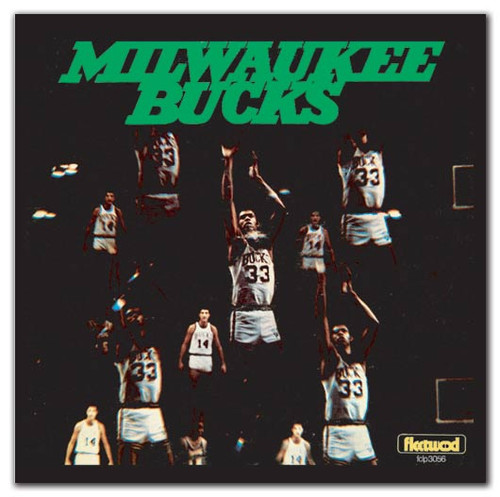 
From the dredges of expansion to the champtionship of the basketball world in just three years -- that's the Cinderella story of the amazing Milwaukee Bucks. No other team int he history of professional sports has gone so far so fast, and chances are that none ever will.

It mattered little to the sports starved fans of Milwaukee that the Bucks finished last in their first season. Attendance set a record of the "rookie" team. And when the Bucks won the historic coin flip for the fabled Lew Alcindor the following spring, their future was assured.

With Alcindor in the lineup, the club that had won only 27 of 82 games the previous season boosted its record to 56-26 and leaped from seventh place to second. But the Bucks didn't go all the way -- the New York Knickerbockers eliminated them in the semifinals of the play-offs -- so they d ecided Alcindor needed help. They acquired it in the person of Oscar Robertson, Big O himself, and the team that resulted from this brilliant blend of talents was one of the greatest of all time.

And as great as Big O and Big A were, this was not a two man team. Jon McGlocklin, Bob Dandridge and Greg Smith completed a devastating first five; Lucius Allen, bob Boozer and Dick Cunningham provided bench strength, and all made major contributions to the club's remarkable success.

Highlights of the Bucks' fantastic season are contained in this spectacular album, narrated by the popular voice of the Bucks, Eddie Doucette.

The opening day victory over Pistol Pete Maravich and the Atlanta Hawks, Big O's big night against the Knicks, the record breaking 20 game winning streak, and finally the biggest achievement of all -- winning the world championship on the night of April 30 in Baltimore. All are covered here, and more, with play-by-play excerpts, dressing room interviews, and many other thrills of the greatest rags to riches tale in the annals of sports.

Hail To The Chiefs