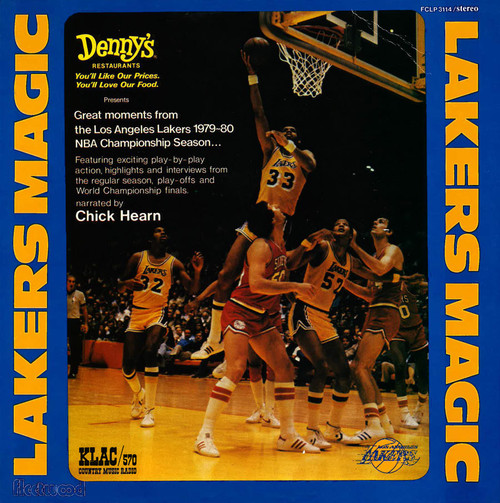 
It was a happening. A magical, marvelous blending of a little bit of old with a large amount of new creating a spirit among players and coaches that quickly communicated itself to the fans in the stands.

Two new coaches, Jack McKinney and Paul Westhead, hired by new owner Jerry Buss, blended a squad carefully put together by general manager Bill Charman through great dreaft selecting and appropriate trading to capture the fancy not only of Los Angeles but of the basketball work as a whole.

Kareem Abdul-Jabbar, perhaps the most valuable player in sports today, led this team to 60 regular season victories and to short order playoff wins over very tough Phoenix and defending NBA champion Seattle, and through that dramatic, storybook conquering of the Philadelphia 76ers for the championship.

Ably supported by veteran forward Jamaal Wilkes and 24 year "Old Pro" Norman Nixon, by the wonderful and mystical Magic Man, Earvin Johnson, by muscleman Jim Chones, Mark Landsberger and Spencer Haywood, by the surprise of the year in the NBA, defender-deluxe Michael Cooper and in the end by rookie guard Brad Holland, Kareem won and unprecendented sixth league "Most Valuable Player" award.

The Lakers broke their own NBA field goal shooting record this year and, in this year of their re-emergence to power, they may well have set an all-time league record for hand-slapping, bear hugging and crowd pleasing.

And, they brough to Los Angeles, with style and grace, the World Championship.