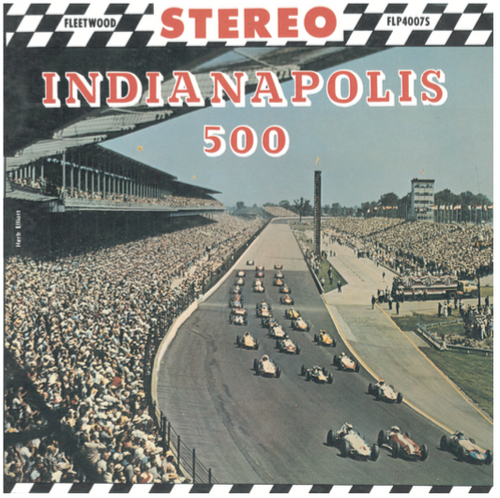 The Indianapolis 500 was recorded on May 24th and 30th, 1963 at the Indianapolis Speedway. Since it would be impossible to reproduce the entire race on one album, we have condensed the better part of 12 hours of recording time and some 57,600 feet of tape into this single CD.
Opening track one of this album you will hear the dynamic sounds of the Novi. We have chosen this qualifying run of Bobby Unser for a two-fold reason. First, the Novi is somewhat of a sentimental favorite at the Speedway being the oldest entry in the competition with over 8 successive years of entry. Secondly, the sounds of this unique 8-cylinder super-charged engine proved to be the most unusual and electrifying ever heard. You will hear the running commentary of speedway announcers Tom Carnegie and Chuck Bailey. Probably the most colorful opening ceremonies found anywhere follow and of course those famous words of Speedway President Tony Hulman, "Gentlemen, start your engines" take us through the starting of 33 of the fastest cars in history.

Continuing through track one and to the end of track two are the highlights in sound of this 47th running of the Indianapolis 500. With over 300,000 cheering spectators in attendance, the proof of automobile racing's astounding rise to number one spot in spectator appeal was quite evident.

The "500" was recorded from a vantage point located at the north end of the pit area. It was recorded on Presto 800-4 modified 2 channel Stereophonic tape recorders. Neumann U48a microphones were used in a close microphone technique developed by Fleetwood. It is this technique that provides the listener with optimum channel separation and stereo depth.

The original high speed masters were transferred to disc on a Neumann automatic Lathe of the lasted design. Westrex 45/45 Stereo cutting equipment was used on the original stereo version of this album.

This recording was made with the field of competitors from right to left.