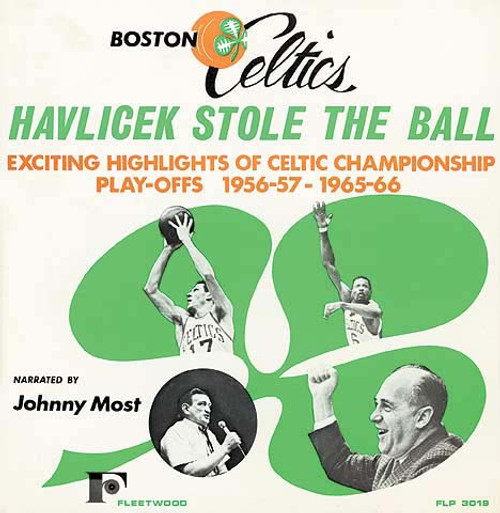 Narrated by Johnny Most

Chronicle of the Boston Celtics first 8 championships, (includes entire Bob Cousy day retirement ceremonies)
Exciting Highlights of Celtic Championship Play-Offs 1956-57 and 1965-66
ABOUT THE RECORDING
The sounds of the Boston Celtics broadcasts featuring Johnny Most were generously supplied by Radio Station WHDH in Boston, Massachusetts. This will account for the fine clarity and fidelity of sound. It must be noted however that one segment on this record album was recorded on a home tape recorder....this tape was generously donated by an avid Celtic fan. This will acount for any variation in sound quality found herein.

THE BOSTON CELTICS
The rapid-fire voice grows hoarse with emotion as the action roars furiously toward a climax. The voice belongs to Johnny Most. The sport is professional basketball as played by the World Champion Boston Celtics. Recorded here are a few of those moments from the 10 years of Celtic domination of basketball.

Professional basketball came to Boston in 1946 under the aegis of the man in whose memory this record is dedicated, Walter Brown. The first 10 years were lean, both in money and victories.

In 1956 that changed with the advent of Bill Russell and Tom Heinsohn in Boston teaming with the great backcourt of Bob Cousy and Bill Sharman. The fat years had begun.

Typical of these years was the final playoff game in 1960 between Boston and St. Louis to decide the National Basketball Association and World Champion. The Celtics had ripped the Eastern Division to tatters that year winning 59 out of the 75 regular season games, an Association record. That team featured the defense of Russell, the scoring of Heinsohn, Sharman and Cousy, the playmaking of Cousy and Frank Ramsey, the matu- ring talent of Sam Jones and the genius of coach Red Auerbach.

The Hawks fought the Celtics seven tough games to a decision for the world title in 1960. Here is the explosive wrap-up to that series that gave Boston its second straight title and third in four years.

Of all the emotion-filled events attendant upon Boston Celtics basketball, none could be matched by the day the Boston fans said goodbye to Bob Cousy after 13 years as a Celtic. It was March 17, 1963 and the packed Boston Garden reverberated with the cheers and the tears for the great Cousy, but a brassy baritone voice out of the rafters wrapped it all up in one phrase: "We love ya, Cooz!" It summoned up a decade of Boston basketball. Cousy was not to conclude his incredible career until April 24 in the beautiful Los Angeles Sports Arena in the sixth and final game of the Championship playoffs. In the final period of that final game the Celtics led by 14 points, but Cousy suffered an ankle injury, came out of the game and the lead suddenly dwindled to three points with little time remaining. Back came Cousy, running on the swollen ankle. The Celtics preserved the lead, the victory and the Championship and Cousy went out a winner.

Perhaps no incident in basketball has ever approached the utterly crucial character of John Havlicek's heroics in the final game of the Eastern Division playoffs vs. Philadelphia in 1965. The 76'ers had forced a seventh game two nights before with a last-second, mid-court heave by Hal Greer.

Now, in the final game with seconds remaining, Philadelphia had the ball out of bounds trailing by a point and trying to set up big Wilt Chamberlain. A stunned Boston Garden crowd watched Hal Greer loft his pass toward Chet Walker, saw Havlicek uncoil into the air, and: "HAVLICEK STOLE THE BALL!"

The Championship series that followed against Los Angeles was a revelation with the Celtics winning in five games. In the last contest Boston put on an awesome display of offensive power rattling off 20 straight points
against the Western Division champions.

In 1966, the championship skein continued but, once again, there was a new note. This time the fans almost cost Boston the title. With less than a minute to play and Boston leading by eight, Red Auerbach lit his last victory cigar before calling it a career after 20 years on the coaching lines. The smoke from that cigar signaled pandemonium in Boston Garden; and when the crowd was finally dispersed, Los Angeles had scored six points in a matter of seconds and Boston was in trouble. Sanity returned long enough for K.C. Jones to dribble out the clock to preserve the victory.

ABOUT THE NARRATOR JOHNNY MOST
The voice of the Celtics, Johnny Most, has been ''high above courtside'' with the Boston Celtics since 1953. During that time, he has drawn a following as avid and dedicated as that of any sports broadcaster in the country. Before coming to Boston, Bronx-born John covered the New York Knickerbockers, the Brooklyn Dodgers and the New York Football Giants. His stacatto style and passionate dedication to the Celtics has made him a widely-known figure in the world of professional basketball.

1961 - Music of the Hawthorne Caballeros

1963 - Hawthorne Caballeros - Through the Years

Hail To The Chiefs